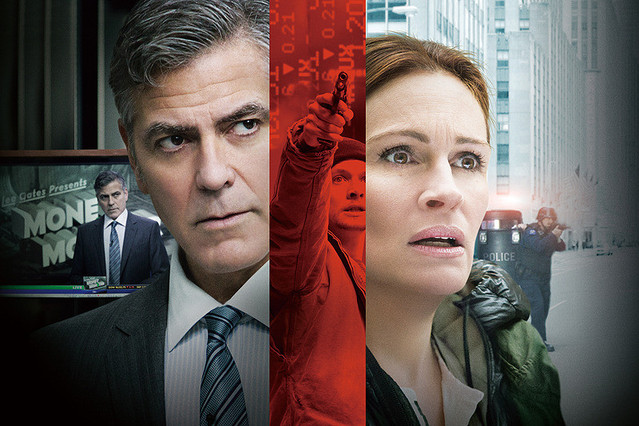 A movie which has the calibre of actors like George Clooney and Julia Roberts is one that usually gets my attention. And the fact that I am writing a review of it means that my hunches about the quality of this movie were not unfounded.

[pullquote]Money Monster is a critique of a society that has become numb to the influences of social media and a culture of violence as entertainment.[/pullquote]

Gates has recently given advice to his millions of viewers to buy shares in a company called IBIS Clear Capital, whose share price subsequently tanks. As a result, the people who took the advice of the popular Gates lose millions of dollars. One of those people is Kyle Budwell (Jack O’Connell), who lost his life savings of $60,000 after listening to Gates.

Distraught and seeking answers, Budwell infiltrates the show as it goes live to air, pulling a gun on Gates and holding him and his crew hostage, as millions of viewers around the country watch on.

Stories like this have a tendency to follow a certain script. Generally, the loner feels ripped off, takes someone hostage, and the plot goes back and forth until the “lone nut” is taken out by authorities and normality is restored.

This story though doesn’t fall for that cliched plot line. It instead focuses on the excesses of corporate greed, the scapegoating of an easy and vulnerable target, and on a society that has become so numb to a culture of violence and social media-led shallowness that its main goal from such an alarming storyline is to merely find the entertainment value in it. In the vein of such excellent movies as The Hunger Games series and The Truman Show, this movie is a reflection of a society that has become bored with a constant diet of information and has lost any sense of meaning.

As the crisis plays out on air, people across America watching in bars and cafes are shown as quite blasé at the sight of another apparent drama unfolding in front of their eyes. Such is the blurry line between news and entertainment.

Meanwhile in the studio, Budwell tries to explain a number of times that he is no dummy. He senses that something bigger has caused himself and others to lose millions of dollars on a bad tip from Gates. The answer he is initially given, that the dramatic drop in IBIS’ share price was the result of a computer glitch, is too simplistic for Budwell. He is more savvy than that.

[pullquote]Perhaps Money Monster will be a victim of the very thing it seeks to expose: that we have become so numb that entertainment is our most important value[/pullquote]

This is not to say that Budwell is not innocent – he is after all holding a man hostage on live television. As his mood swings between frightening agitation (firing shots in the studio and forcing Gates to don an explosive-laden vest) and an openness to listening to what Gates offers as a possible way out of this crisis, the host himself is taking advice through his earpiece from the show’s producer, Patty Fenn (Julia Roberts).

As Fenn and her staff work feverishly behind the scenes to get answers to what caused IBIS’ share price to crash, it is revealed that IBIS’ CEO, Walt Camby (Dominic West), is behind an elaborate bribe that went bad and cost the company $800 million. As Gates learns the news from his producer, he tells Budwell, helping him realise that they are now both on the same side. Gates and Budwell then defy orders from Fenn and leave the studio to confront Camby, who has just arrived back from South Africa after his bribe attempt failed.

As Gates and Budwell risk their lives walking through the streets of Manhattan to meet Camby, they are met with cheers, jeers and mockery as bystanders lap up what they are seeing. An event that is a major hostage crisis has become nothing more than another event to gawk at and share on social media.

This story is a very good critique of corporate excess as well as the impact of a constantly online, connected society which produces a numbness to the point that it decreases our sense of humanity. But the movie also shows something else: it shows that ethics still matter in a world where the lines between make-believe and reality are increasingly blurred. When it is revealed that Camby has not in fact broken any law but has nonetheless duped people out of millions of dollars, you can see that ethics and morality stand on higher ground than the law and in fact are the basis for laws that are just.

Perhaps the most revealing scene in this movie is towards the end when, after the crisis is over, one viewer in a bar simply goes back to his game of table soccer as if what had just happened was simply another TV show.

It will be interesting to see the reception that Money Monster gets. Stories that reveal the blindness and self-delusion that has come upon our culture are often not the ones that win the awards. Perhaps Money Monster will be a victim of the very thing it seeks to expose: that we have become so numb that entertainment is our most important value, and that prophetic critique is still rarely understood in its own culture.