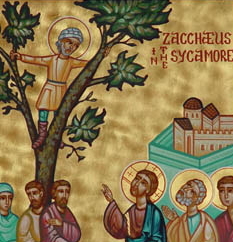 Jesus entered Western Australia and was passing through. A man was there who was a very wealthy mining magnate. He had heard about Jesus and wanted to see who he was.

When Jesus saw him he said to him, I must stay at your house today. The mining magnate couldn’t believe his ears and welcomed him gladly.

All the people, especially those who were strong social justice activists, saw this and began to mutter, “He has gone to be the guest of a mega-rich mining magnate. If he really cared about the little people, he would know what sort of character this person was.”

But the mining magnate stood up and said to the Lord, “Look, Lord! Here and now I give half of my wealth and earnings from my mines to the poor, and if my mines have been detrimental to the lives of people or to the environment, I will close them and pay back four times the amount.”

Jesus said to him, “Today salvation has come to this house, because this man too has a high place in my kingdom. For the Son of Man came to seek and to save what was lost.”

Jesus always surprises us. My wife and I have spent the last 12 years in a poor inner-suburban church which is doing well if it has $1,000 in the bank. We are social justice types who also have a passionate concern for the environment. Call us hippie lefties if you like, but I would rather be known as a follower of Jesus who struggles and many times fails to live up to the life that he calls us to.

I get angry when the mega-rich whinge about their rights and how they’ve got it so difficult. When I hear them say such things, I wish they would get a dose of reality. But then I read the story of Zacchaeus and see my own reverse snobbery. We love to pin the rich up against the wall – and most of the time they deserve it – but we have no right to judge them as if we are somehow better.

Jesus never does this. He always pulls the rug out from underneath us and exposes our character flaws. That’s why you can never put Jesus in a box. If you try to paint him as someone who is more left-leaning than most, he reminds you of how he related to Zacchaeus. And if you try to place him amongst the moral majority who decry the declining values of our culture, he reminds you of the woman who knelt at his feet and poured expensive perfume on him whilst those standing around condemned her for not spending the money on the poor.

One of the reasons I love Jesus – and one of the reasons I sometimes want to avoid him – is because he can never be pinned down. Whenever we think we know what he is on about, he surprises us. But in doing so he never condemns us, never condemns anyone. That’s why I can trust him, and that when I am challenged by him. I don’t have to run away, because all he wants to do is show me what is best, show me that his ways are not my ways, and that he is ultimately trustworthy. We can read the gospels a hundred times over and still be shocked by the outrageous, counter-cultural, unconditional, life-affirming, comfort-shattering love of Jesus. Our response to such actions of Jesus as is seen in the story of Zacchaeus or its modern equivalent of a mega-rich mining magnate says more about us than it does of Jesus or the mining magnate, or whoever else you want to put in the story.

Kenneth Bailey, author of Jesus Through Middle Eastern Eyes, also makes the crucial point that in offering to spend such intimate time with Zacchaeus, a hated Roman collaborator, Jesus turns the hatred of the crowd from Zacchaeus onto himself. This is one of the real points of this story. Jesus always shows his love and grace at his own expense.

Bailey also points out that, once again, the transformation Jesus gives is complete. It is not just about the transformation of Zacchaeus from a wealthy money-grubbing hoarder into a beautifully generous human being; the transformation also has wider implications for the village he lived in. The people there would no longer be oppressed and ripped off by this former Roman collaborator. God’s grace came to everyone that day, not just to Zacchaeus’ house.

Jesus’ love is real; it is costly and it is sacrificial, as real love always is. By calling out to a hated tax collector, Jesus took the crowd’s hatred of this despised person onto himself. In the process, both Zacchaeus and the villagers are all freed. How would we respond today if Jesus wanted to share an evening in the lavish home of a wealthy mining magnate, enjoying their company over a nice meal and a few red wines? Would the social justice types among us question whether or not this was the real Jesus – friend of the poor – or just an impostor? Would others of us be smug in our seeming affirmation that God really is about prosperity? Or would we question ourselves instead, suddenly realising that we assumed we had Jesus all to ourselves?

Jesus caused a crisis everywhere he went. Just when we think we have him right where we want him, he shocks us, and reminds us again that we can never paint him into a corner. If a well-known multimillionaire walked into your church, how would they be received? Would we welcome them with open arms, or would we think, “what are those rich *&%^/*%&%^ doing here?” Jesus loves the mega-rich just as much as he loves you and me and the poorest people on the planet. God help me to be the same.