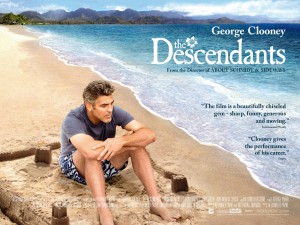 In this movie set in the beautiful islands of Hawaii, George Clooney plays brilliantly the role of Matt King, the father who could probably relate a bit to the suffering of Job. His wife has just had a boating accident, is in a coma and is about to die. He then finds out that she had been having an affair. And to top it off, the guy she was having an affair with is about to make a bucketload of cash on a property sale that King is working out with his family.

The Descendants portrays the dignified response of a man and his family who are experiencing immense suffering. Despite his impending loss and and recently exposed betrayal, King conducts himself with honour, confronting the man who was sleeping with his wife and allowing him to pay a last visit to her on her death bed. King could have punched his lights out, but he didn’t. And, regarding the property deal, in the end he allows virtue to triumph over cold hard cash by scuttling the deal through his refusal to sign the relevant documents for the sale. King chooses the right way over the more tempting and exciting profitable way. He chooses to keep the property in the family, as the family’s descendants would likely have wanted, much to the chagrin of his cousins who are gobsmacked at his seemingly irrational decision.

This movie shows that character is more important, long-lasting and satisfying than quick gains and cheap shots. King’s seventeen year old daughter, Alex, is also impressive as she follows the example of her Dad in her quickly developing maturity. She lovingly looks after her younger sister, Scottie, and helps their Dad track down the infidel who has been sleeping with his wife. Alex’s immature friend, Sid, is another one who goes through a redemption of sorts as he realises the lack of tact of some of his earlier comments – particularly to Elizabeth’s parents – and pays the price for it. Being a young man about to enter early adulthood, Sid could have chosen to remain defiant and be stubborn and do things his way. But instead he learns from his mistakes and becomes a valuable support to King and the family, to the point that King himself comes to him one night to ask his advice about how to handle his multiple life challenges.

I have been reading Proverbs recently and, as many would know, there is plenty of great advice in that marvelous book about living a life of wisdom. I remember when I read the early chapters of Proverbs as a young man myself, that I had the profound realisation that that is the type of person I want to be. The main characters in this raw and emotional movie provide a real-to-life example of living out much of the sage advice of Proverbs to young men, and indeed to people of all ages and backgrounds.

Dignity, relationship and virtue are the enduring qualities of life. They are what will ultimately win out. They are what will triumph over short-term gain, revenge, and quick riches in the end, if not in this present life. The Descendants is testament to the riches of the wisdom of Proverbs over the riches of this life, which will pass away and prove worthless in the end. Recommended.