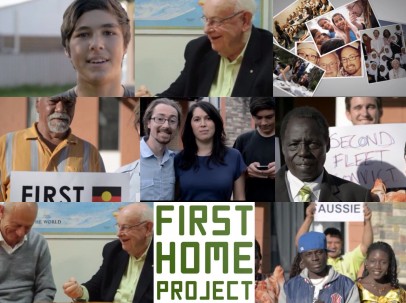 “‘Where is home? Where is my home?’ I hear my spirit cry” – Midnight Oil, Home

“Still gotta let you know, a house doesn’t make a home” – U2, Sometimes You Can’t Make It On Your Own

Every human needs a sense of place. Everyone needs a sense of belonging. We need a place we can call home. That’s why the issue of land rights is so important for Australia’s indigenous people. It goes right to the core of their identity. The land is about who they are. It’s also why children in foster care are so disadvantaged. From the first years of their life they are moved around from place to place, and they may even receive lots of love. But the more they are shunted around, the more they will have building up inside them the nagging question, ‘where do I belong?’ This question nags away at their fragile souls, and it’s no wonder so many become so restless in so many ways later in life.

Bono’s profound statement in the line above about a house not necessarily making a home strikes at the heart of identity. We need a safe place in our lives, a place of refuge, a place we can come to and know it’s ok. That’s why Australia’s treatment of asylum seekers is just more and more shameful. It speaks volumes that the Gillard Government’s decision this week to excise the Australian mainland from the migration zone didn’t receive howls of protest from the Opposition, because they totally agree with it.

This decision is so bold in its sinfulness that it leaves me speechless. If it was done on April 1 you would think it was an April Fool’s joke. How can you excise a whole nation from the migration zone?! And how can you do it and not have it front page news for days, with people protesting in the streets? This is beyond cruel. Waleed Aly, as usual, has a level-headed approach to this shame. And, also as usual, Jarrod McKenna’s First Home Project is providing a wonderful solution.

We have a lot to learn about our identity from our indigenous people, from the way children in care deal with their lives, and from the millions around the world seeking asylum. We in Australia are indeed a privileged nation. We are so comfortable we have no idea of the suffering of these three groups of people. And of course there are many more. There are the other millions of humans, mainly women and children, trafficked for the gratification of others. These people don’t have a sense of place either. Then of course there are those in the West who live in loneliness and depression, a constant anxiety churning away at their insides day after day.

It is true what Augustine and a few others said about the fact that the human heart is restless until it finds its home in God. That does give a sense of home because we know that this earth will be our home one day when heaven comes down to join with it in wonderful and beautiful renewal. But that doesn’t negate the need for people to have a sense of place in this life now. In fact, when thought of rightly, the fact that existence will be renewed and we will finally have a sense of home actually motivates us to give our lives to make sure the disadvantaged among us know a sense of home.

This is where love is again shown to be the answer. Giving a child a sense of home, a place where they can go to sleep at night tucked in and trusting that they are safe and secure, is absolutely essential to their sense of identity.

The fact that the Son of Man had nowhere to lay his head was another travesty of justice in that innocent Man’s life. But instead, as always, he showed us that despite his own lack of a sense of place, he showed us home, not just when he resides in our hearts, but when we are finally together as family in our homes on this renewed planet.