Running up the white flag 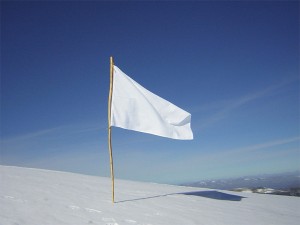 ‘Surrender’ has been a dirty word since time immemorial. Ever since Adam defied God by refusing to continue to submit his life to the One who created him, we have a natural tendency to baulk at the idea of giving up control. The irony is though that giving up means gaining. We surrender to live.

Surrender is about pleasing God above all else. It is about having an attitude of not being rebellious at all, of not running life our own way, for that is defiance. Surrender comes out of a deep realisation that our own way of doing things has not been working. Countries surrender in war when they are forced to, and they realise the game is up. While God never forces us into surrender, we only do so when we realise the game is up with our lives and we choose to give up control and surrender our will to the Higher will.

The way of surrender is completely counter-cultural. In our individualistic society where we are told that we are the most important person in the world and we have to be in control of our lives, submission is weak; control means power. This is just the way it was 2,000 years ago when Paul wrote to the Corinthian believers. When they had all sorts of problems in their church community because of people coming in and questioning Paul’s authority, Paul reminded them that God has chosen the weak things of the world to confound the strong, and the foolish things to confound the wise. He had to remind them that it was not about knowledge and power; it was about the ultimate paradox in their thinking – a crucified messiah. This was how God has overcome evil and death, and this is why it looks so ridiculous to everyone else. In fact it is ridiculous, when you look at it from the point of view of the prevailing culture. We even find it difficult in the church when we have constant talk of success, growth and slick worship – the main concerns for most pastors.

I wonder what Paul would say to the church of the 21st century. I reckon it would not be all that dissimilar to his first letter to the Corinthians. Life in Christ is about victory in defeat, submission and surrender to a God who dies, and a God who calls us to die as well. In our Western lives we will rarely, if ever, be called upon to literally put our lives on the line for our faith, but would we be willing to if it came to that? I shudder at the thought in my own life. I’m not sure I could do it. After all, Jesus said that greater love has no one than to lay down their life for their friends (Jn 15:13).

There is a sense in which I wonder if it is actually harder to be a Christian in the West than it is in places where life is a daily struggle. In the West we have so many distractions, so many enticements to live the easy life, whereas in other places, God is all they have. I have mentioned before, Tim Costello’s observation that when the tsunami ravaged parts of Asia in 2004, it was the people in the West who asked that great theological question of how you could believe in a God who would allow this to happen. The people who experienced the disaster firsthand though were asking a different question. They were asking how they could not believe in God for He was all they had left.

Surrender and submission are totally ludicrous concepts in a world of power and control. But take a look at what it has produced. Are not our conflicts primarily about power? Are they not about control of resources? Are not our relationship problems primarily about feeling like our needs are not being met or about losing control over our lives, be it financially or emotionally?

Please understand though that this is not about pleasing people necessarily. If you are like me and are a people-pleaser by nature, you will likely believe that submission and surrender to God is all about being nice to people. It is not. Loving someone does of course involve being nice, but it also might mean pressing charges against a husband who is physically abusing you. Christian psychologist Dan Allender reminds us that Jesus said we would be known by our love, not by our manners.

Surrender to God doesn’t always feel like surrender. Living the Way of Jesus, having your heart submitted totally to Him, having your will surrendered to Him, is swimming against the tide. It is swimming against the tide of popular opinion in our culture, and it is swimming against the tide of our own prevailing mindset (which of course is constantly being shaped by our culture). That’s why Paul’s advice in his letter to the Romans is so crucial: ‘do not conform any longer to the pattern of this world, but let yourselves be transformed by the renewing of your minds. And then you will understand His will – His good, pleasing and perfect will’ (Rom 12:2). Notice how Paul doesn’t say ‘transform yourselves’, but ‘let yourselves be transformed’, or simply, ‘be transformed’. It is about allowing God to work in your life. And God will not work in your life unless you let Him (some would say here that God is a gentleman in that sense. I’m not comfortable with that idea. For me it conjures up all sorts of images of God in a top hat and suit who is all about opening doors for ladies and helping old people across the road. Not that those things are not godly; they most definitely are, but God is much much bigger than that).

Becoming a ‘transformed non-conformist’, as Martin Luther King put it in his book Strength to Love, might not feel like you are surrendered to God. On starting out on this journey, you may be confused by your emotions. I experienced this when I was nineteen. I was going through a time when I was faced with the fact that my timidity and self-pity were not the way of the Jesus I wanted to follow. I was more of a boy than a young man. So over some months as I gradually opened myself more to God, I became more Christlike. But at the same time I felt like I was becoming less loving, and I couldn’t reconcile the two. I was being more assertive and learning to stand up more for what I believed in, because I was inspired by these aspects of Jesus’ character in the gospels. Passages where he told off the Pharisees and where he went through the temple and drove out the money-changers (Lk 19:45-46) moved me deeply. God became more real to me than He ever had been before or since. Passages like where Jesus says that ‘ask and you will receive, seek and you will find, knock and the door will be opened to you’ (Matt 7:7), and ‘you will know the truth and the truth will set you free’ (Jn 8:32), and ‘if the Son will set you free you will be free indeed’ (Jn 8:36) all spoke to my experience of God at that time. It was truly something of a conversion experience. I had a knowing that this is what I had been looking for all my life. Suddenly I knew what Jesus meant in the above-mentioned passages about being free. But at the same time I felt like I was losing my love, and so I was confused. In my thinking I was becoming more Christlike but less loving. It didn’t make sense.

Pleasing people is about timidity and fear, but pleasing God is about joy. And interestingly it is about love and trust. Perfect love drives out all fear, and if we are confused about our emotions we need to trust the character of God and know that being more Christlike is being more loving, even though it might feel like the opposite to a people pleaser. It took me years to grasp that. I had to learn to trust God at a deeper level. And the more you trust God, the more you come to know that there is nothing that surpasses the joy of doing what is right and wanting to please God. That is where life lies.

All this is difficult, and it involves brokenness. It is only when we surrender ourselves in absolute brokenness to the Lover of our souls that He enters in and transforms us into something beautiful. It is said that God can only enter a heart that is broken. If our hearts are closed and there are no cracks, there is no opening for God to enter in. It is in running up the white flag in surrender, coming to the end of ourselves, that we are able to allow the amazing grace and love of God into our lives. Day by day, hour by hour, God can expel the selfishness that has us trapped on the purposeless treadmill of life, going ’round and ’round but going nowhere. Then can he transform us into people of the Way, living for love, living for the ways of the kingdom and its King. Truly living. Life in all its fullness.