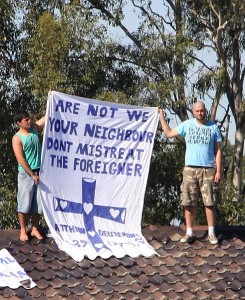 After last week’s Houston Report on how to deal with asylum seekers was released and then debated, here are my thoughts on the issue (with thanks to my wife for her intelligent and passionate explanation of some of the issues to me).
About 10 days ago, we went to a dinner run by the Asylum Seeker Resource Centre, among other groups. I have always thought that Australia’s treatment of asylum seekers was inhumane, but what I heard, including from a former asylum seeker himself, took it to another level. Australia is at a low ebb in its treatment of desperate people fleeing for their lives. My wife, who has a passionate interest in this issue, also put me straight on why the Houston report is cruel in its recommendations.
The ABC piece especially is brilliant and heartfelt in its description of true Christian faith, the way of Jesus of Nazareth, welcoming the stranger. Australia is a long long way from this at the moment. And for Tony Abbott to invoke Christian values in his comments on this issue is misguided at best. It is in fact obscene as he knows the facts. For him to talk multiple times this week about the 22,000 “illegal arrivals” is typical of his political ambition. He has been told numerous times that under Australian and internaitonal law, it is not illegal to seek asylum, even if you don’t have documents or even if you have false documents. There is no such thing as illegal arrivals. Given that he knows this – and to be pulled up on it strongly as he was by Jon Faine during the week – shows that he is either incompetent in his understanding of the issue, or that he is deliberately making a political point to invoke fear of the outsider. It is clear to me that it is the latter. Either way, it makes him unfit in my opinion to be Prime Minister of this country. Check out the following articles:
http://www.eurekastreet.com.au/article.aspx?aeid=32778
http://www.eurekastreet.com.au/article.aspx?aeid=32773
http://www.abc.net.au/religion/articles/2012/08/16/3569184.htm
Facebook Comments