Healed through our brokenness 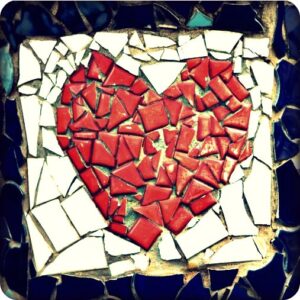 I recently received a simply beautiful text message from a friend of mine who I have been journeying with. He told me how he sensed that God was working through me, despite dark times in both of our lives this year. I find it simply staggering that God works through even me, in my brokenness. I don’t mean that in a negative sense, like I am worthless and why would God even bother. I mean it in a sense that God is so good, the depth of his goodness is so deep, deeper than we can ever imagine, that he chooses – chooses – to work through people as stuffed up and broken as I am.
It has been said that God can only come into our hearts when they are open and cracked. We are cracked vessels, and it is through the cracks that God shines. It has also been said that the night is darkest just before the dawn. A new day is coming, a day when all brokenness will be healed, when all our twisted desires will be redeemed. If our hearts are closed, if there are no cracks in our hearts for God to seep through, how can he ever come in?
This is a God who deliberately does not choose the way of power and of might, the ways that we think are the only realistic way to go. “Not by might, not by power, says the Lord.” God deliberately chooses to work through brokenness. A broken and contrite spirit he will not despise. The sinners are the ones he has come for, the ones who everybody else thinks they are better than, the ones who are trodden on by the world and its powers. It is the ones who recognise they are broken who are the ones God is close to. We find it so hard to grasp that. We always think that God would never choose us because we are just too stuffed up, too far gone. But let it sink in that that is exactly why God does choose us. He doesn’t choose to work any other way.
This is a God, this is a Christ, who is counter-cultural, a God who exposes the idea that everything we think is valuable is actually not, and that everything we think is worthless and unrealistic is actually not. God’s power is shown through weakness. It was through the utter humiliation of the cross that God chose to defeat our greatest enemy: death. Through his own death he took on ours, and through his resurrection he defeated death. That’s why I believe in the physical resurrection of Jesus as an actual historical event 2,000 years ago. That, as well as the fact that I don’t believe anything else realistically explains the complete turnaround of the early followers of Jesus and the – in some ways – unbelievable explosion and growth of the early church. Something happened back then – and I have read a heck of a lot about this – that changed the first followers of Jesus from cowardly, unsure men who deserted Jesus at his moment of greatest need, into men of such courage that within a couple of hundred years their fledgling movement had shaken the very foundations of one of the greatest empires the world has ever known: the Roman Empire.
And how did they do it? Through love, through brokenness, through sacrifice and through literally risking their lives for the sake of others. These were people who had a hope and joy that nothing, not even the power of Rome itself, could take away.
We come to know Christ – and are made more human – through our brokenness. As the old chorus goes, all I have to offer him are brokenness and strife, but he’s making something beautiful of our lives.
Facebook Comments