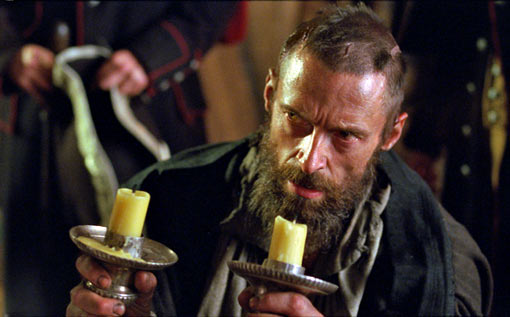 If you wanted to find an illustration of what the Gospel is, you couldn’t do much better than going to see the latest film version of Victor Hugo’s Les Miserables. As old as this story is, this is the first time I’ve ever been through it. I have never finished reading the book, nor have I ever seen a film or performance of this most incredible of stories.

The Gospel comes out in this story as powerfully (perhaps even moreso) as it does in C.S. Lewis’Chronicles of Narnia. The overarching storyline is one of grace compared to law. The first clear sign we see of this is when the convict Jean Valjean (played by Hugh Jackman) is caught stealing a whole lot of silverware from a priest who has given him lodging. Dragged back in disgrace to the priest’s house by the police, the priest remarkably says to Valjean that he forgot to take the fine candle holders, and gives them to him as well. Struck by the unfathomable mercy and forgiveness shown him by the priest. Valjean becomes a changed man, rebuilding his life to eventually become mayor of a small town. From petty thief to an honest and good man, Valjean begins to love because he is first shown love (1 John 4:19).

Javert (played by Russell Crowe) on the other hand is obsessed with the law. For him, pleasing God is about keeping the law, being an honest and upright person, a citizen of good standing in the community, one of whom nothing bad can be said.

For years Valjean is hounded by Javert, whose attitude to law-keeping ventures into legalism. There is no room for forgiveness in the thinking of Javert. If you don’t keep the law you’re a bad person. For Valjean though, he has experienced firsthand that mercy triumphs over judgment (James 2:13).

As I think about the story and the context of Les Miserables, I am reminded that we live in a society that doesn’t know alot about grace. And the further we move away from a Christian foundation in our culture, the less grace we will see in future. In our Western, post-Enlightenment way of viewing the world, grace doesn’t make sense. It is not logical, not rational. To be frank, grace isn’t fair. But that’s the whole point, With grace, we get what we don’t deserve, and don’t get what we do deserve. It is not what the prevailing culture says is right. As I have said previously, the Gospel is not about common sense.

As the paths of Valjean and Javert cross over the years though, something softens in Javert. A couple of times Valjean saves Javert from a sinister end, and this law-obsessed policeman cannot understand why. Like Peter after the miraculous catch of fish in Luke 5, Javert cannot come to terms with grace, with forgiveness. Unlike Peter though, Javert ends up taking his own life, unable to reconcile the grace shown him with his own view of the world. The tragic irony of Javert’s death is revealed in some of his final thoughts: Valjean does not realise that by inexplicably saving Javert’s life, he (Valjean) has actually brought it to an end.

This is the disturbing fat about grace. Grace is confronting. It forces us to deal with life as it really is. When we are shown grace for what it is, we are unable to deny the truth that it triumphs over hate. Les Miserables shows that evil and darkness cannot cope when it comes face-to-face with love. The light shines in the darkness and the darkness has not overcome it (John 1:5).

It is not just the harrowing of Valjean by Javert that reveals the differences between law and grace in this movie. On a broader scale, the differences are also seen in the young people fighting for an end to corruption in their beloved France. The French Revolution began because the people had had enough of corruption and social divisions by the monarchy in their beloved country. The rebels are the ones fighting for a new tomorrow, and it is the establishment who is fighting to keep the status quo.

In the end Les Miserables concludes on a note of hope, a hope for a tomorrow free of corruption, evil and hatred. Overtones of Revelation 21, when there will be no more tears, no more pain for the old order of things will have passed away forever.

The movie itself is put together brilliantly. Wonderful performances from Hugh Jackman, and Anne Hathaway as Fantine, stand out. Russell Crowe as Javert is good too, though his singing voice does not have the range and quality of some of the others.

Seeing the vast majority of the dialogue sung can also be a distraction, but it does allow for some brilliantly arranged scripting. In some of the songs, the same lines mean completely different things to different people. This is some of the genius of this particular telling of the story.

For me, this version of ‘Les Mis’ was one of the best movies I have ever seen. It is intensely and immensely moving. Some years ago when I told a pastor of mine that I hardly ever read any fiction, he suggested I read Les Miserables. I’m so glad I’ve now seen this movie and am familiar with the entirety of the story. And the reality is that it really isn’t fiction anyway. This is a wonderful telling of the Gospel message, and that, as far as I am concerned, is as much fact as day following night.