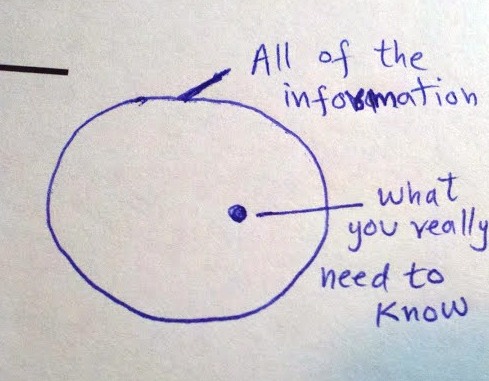 If ever we had a case of that in human history it is in these days of the world wide web. No wonder it has been coined the information superhighway. We have so much information, and knowledge beyond measure. But is it good for us? Has it made us a better society? Surely the internet has brought untold benefits to humankind. Witness the use of social media in the Arab spring, and how human rights abuses are brought to light so much more quickly these days. There are less places to hide for those who would perpetrate such hideous crimes.

But what do we say about the value of the glut of information we now have literally at our fingertips? Alister McGrath, in his book, Surprised by Meaning, quotes the poet Edna St Vincent Millay who spoke of a “meteoric shower of facts” raining from the sky. Millay, McGrath says, points out that we are overwhelmed with information but we cannot make sense of the “shower of facts” with which we are bombarded. McGrath goes on to say, “confronted with a glut of information that we cannot process, we find ourselves living on the brink of incoherence and meaninglessness.” He then gives the clincher: “information is not the same as meaning, nor is knowledge identical with wisdom.” For an intellectually-minded person like me, that is something I need constant reminding of.

Our glut of information also feeds a sense of addiction and confusion. We have so much available to us that we are less likely to finish anything we start. We are more likely to spend more time looking for the perfect piece of information to satisfy us. Eventually we end up frustrated and never really satisfied. More than that, we end up not knowing what we are really looking for anyway. We find ourselves looking for information for the sake of it. The result of this is that our search for knowledge actually makes us less knowledgeable because we only partly take in the information we look at. With the glut of information at our fingertips, it is becoming harder and harder for us to sit down and really digest a good book from cover to cover. Mark Sayers talks about this in some detail in The Trouble with Paris.

Too much knowledge can be detrimental to us. A sense of being constantly wired becomes the norm such that we don’t even realise it anymore. The peace we want feels further away than ever.

St Paul went further. He said knowledge puffs up, and the only thing that really matters is love. To the Greek philosophers who would probably have read or at least heard about Paul’s letter to the Corinthians, that would have been an affront to their sense of dignity. This is the very point Paul is making though; our dignity is not something we gain through knowledge. If we have knowledge and someone else does not, we do not have more dignity than that person. Knowledge does not define us. Our dignity is inherent. It is our acceptance of that fact that fills our lives with meaning. We live for love. That is when we come most alive. As St Irenaus said in the 4th century, the glory of God is a human being fully alive.