God of the outback 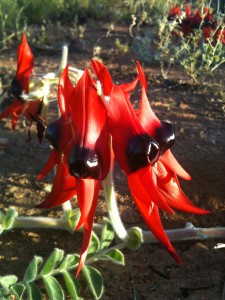 Childhood memories can be a great thing. My wife and I have just returned from Broken Hill in NSW. During our stay there (which was only a couple of days), a number of events triggered nostalgic emotions for me. Driving through one of the most famous towns in Australia reminds me that there is so much history in this place. That and the fact that it was about 40 degrees every day we were there makes you realise that this is the outback. More than that though was the typical country hospitality of the family members we stayed with. These are people of whom city folks like me live off the backs of, and yet they will do anything for you.

Being in a place like Broken Hill, in the Australian outback, does something to you, especially if you have not been there for a very long time. I was last in these parts 35 years ago on a trip to the Flinders Ranges with my Mum, Dad and brother. We never actually made it to Broken Hill on that trip due to the fact that we rolled our car just near Lake Frome, but that’s a story for another time. But despite that, the fond memories of being ‘beyond the black stump’ came flooding back on this trip. One event that it brought back for me was the brilliant sunsets that you only get in places like this. The sky turns a brilliant orange as the sun goes down over the vast empty land, giving the lizards and kangaroos some respite for another day. Occasionally you will also hear the cackling of galahs and cockatoos in the distance as they feed their young after a hard day’s scavenging over carcasses of dead reptiles or other animals. Their greatest competition of course is the mighty wedge-tailed eagle, soaring over the cloudless sky, as they do, with the authority of that other king of their own terrain, the lion.

The simply beautiful flora and fauna evoke even more wonderful memories. The Sturt Desert Pea is the flower everyone talks about out here, and you can see why. I still remember my mother exclaiming in delight in her thick German accent, “The Pea! The Pea!” the first time she saw this uniquely Australian flower with its rich red vertical petals marked with the blackest of black spots. 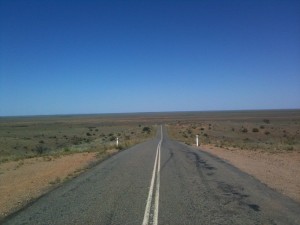 This is truly a sunburnt country, of droughts and flooding rains, as the famous poem puts it. And in just the last few years, haven’t we seen the disastrous extremities of both? It is a vast land; a land of endless horizons where there is yet more of the same nothingness over the next hill. Or if you look at it a different way, there is something spiritual in the vastness. I reckon I now understand a bit more of why Jesus was led into the wilderness to prepare for his ministry. Rowland Croucher has said that one of the characteristics of the prophets is that they each went through a time in the wilderness. There is something about the ruggedness, the wildness, and what you might call the ‘untouchedness’ of this land that speaks of the character of God. This is a place where in years gone by, the toughest of men and the most robust of women were faced with their own mortality. You simply had to survive in this place. There were none of the accoutrements that we cannot seem to get by with today in the big city. Out there you were faced with the flies, the heat and the dust, and you simply had to deal with it.

As I reflected some more on the beauty of this part of the country, I was reminded of a song that Steve Grace sings in which he tells of his love of Australian country towns. There is something Christlike about the giving nature and generosity of people out here. As Grace puts it, “I thank God for Australian country towns and the special kind of people that I like to be around.” These are people who are generous to a fault; people with faces worn by harsh years of living on the land, people who know what it is to face hard times and have their dignity not only retained but enhanced. As I have said elsewhere, there is something about suffering that is redemptive, or at least can be. It can give you a depth of understanding and empathy for the plight of others that people who haven’t suffered deeply simply cannot possess, however sympathetic they might be.

Without wanting to romanticise the outback and its people – of course not everyone is like what I have described above, just like anywhere else – every city person should spend a decent amount of time in a town like Broken Hill. And I don’t mean in a comfortable motel while you spend the day visiting the local tourist attractions. I mean living with a family who can tell you stories of what it is like to live in this part of the country. If you are able to do this, you will learn something about life and coping with it that will touch something deep in your soul. There is a good chance you will know more of what real community is. In our Facebook generation we learn to determine our worth by the number of people who have ‘friended’ us and we are thereby robbed of living in real community. Dave Andrews made the point once that real community is where there is always someone you don’t want to be around. That’s why it is so good for us. Because we can’t just ignore them or ‘unfriend’ them. We are forced to relate, and we grow in the process. It is real life.

It is the harshness of the land that also shapes the irreverent and hard-nosed humour of the people who live out here. Many Christians would find the humour crude, yet this is the culture in these parts. There is nothing offensive about it. It’s just the way they express their experience of life in this harsh part of the world.

I love the outback. Maybe it’s those wonderful childhood memories it brings back. Or maybe it’s the yearning for something wild in the spirit of a male that it evokes. After all, if you believe that we have been around for many a million years, then the wild vastness of this place is where we have our roots. This is God’s own country: unspoilt, untouched, and untamed. We have a lot to learn from this part of the world and its people. They also have a lot to learn from us, but when the vast majority of the country lives in an urban sprawl, it is the spirit of the outback that can bring us closer to the wild, rugged God who made it all.