Do you really believe this stuff? 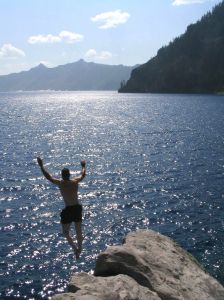 Do you own your faith? I mean really own it. Or is it something that has ‘always been there’? Many of us have grown up in households where Christian faith was practised, at least nominally, and sometimes it has helped us and sometimes it has hindered us. The fact is that for many of us who grew up in a somewhat Christian home, our faith has never progressed much past what our parents have believed and passed onto us.

For faith to mature, it needs to be tested, it needs to progress out of our comfort zone. Tim Costello has said that you only begin to understand your own faith when you move out of your comfort zones. Someone else said to me years ago that anything worth fighting for is never going to be easy. Faith is definitely worth fighting for, and it is indeed a risk. It is tough to step out and embrace what is unfamiliar. It puts us on shaky ground where our only option is to trust in the goodness of God. But it is in that very place that we grow and experience life as Jesus described it in John 10:10.

If you’re anything like me you will also have struggled with the temptation to take on a particular belief just because someone you admire believes it. Such an action is often borne out of an insecurity in which we are not quite sure what we believe. This insecurity can also make us want to stand out from the crowd, so if someone well known believes something a bit different, people may just admire us if we believe it as well. The problem with that is that we actually don’t really believe it at all. We are instead trying to build or maintain a reputation based on the faith of someone else. When this ‘faith’ is put to the test, we find that we have built our house on sand rather than the solid bedrock of genuine faith.

If we persevere though, and we are able to se through our deception, we find that our beliefs become our own, and they are no longer simply beliefs; over time they instead become convictions, something we ‘know’ deep down. Rob Coyle said years ago that conviction is something that goes far deeper than belief. Convictions are things for which we would be prepared to lay down our life.

What we believe matters, and it matters how much we believe it. Having strongly held convictions makes us much more sure of ourselves and allows us to love more powerfully. But for beliefs to turn into convictions requires us to be committed to growth. If we are maturing in our faith, we will not be so afraid of being challenged; in fact we will welcome it as an opportunity for further growth. But if we are a new believer, or we have long struggled with doubt, we can quickly become disillusioned if our faith is challenged, or if someone we look up to behaves in a way that is not in line with our dearly held beliefs of what it is to be a Christian.

I used to struggle when I heard about Christians I looked up to doing something I didn’t think was Christian. When I was in my late teens I started to admire Martin Luther King for his stance on civil rights, and his courage to live out his convictions. Then one day I saw a photo of him smoking a cigarette. Some people reading this will wonder what the fuss is about, while others will have a similar reaction to that which I did. In my thinking back then you couldn’t be a Christian if you were a smoker. I judged Martin Luther King through the lens of my own theology. I didn’t have the maturity to look past such matters to the weightier matters of justice mercy and faithfulness (Matt 23:23). As I have grown in my faith and have become more acutely aware of my own shortcomings, I am able to have just as much respect for people like Martin Luther King as if he never smoked a cigarette in his life. I don’t condone smoking, but in the life of someone like him I don’t consider it anywhere near a game breaker. The fact that he also had well-documented affairs is another issue, but I have also realised that the deep moral failures of such people make them more human, and in a strange way, more accessible. I can relate more to them because I am more aware of my own failings.

One of the most helpful things I read many years ago that helped me to deal with the differences in people I looked up to was a quote that said “you only become disillusioned if you have illusions to begin with”. Realising this has benefited me enormously in my own journey of faith. I realised that I could still look up to someone despite them engaging in behaviour that didn’t fit my theology (within reason of course. If it turned out that someone I admired had spent all their lives being a fraud, my respect for them would quickly diminish). I realised that if I struggled with someone’s behaviour or something they said, it was my job to look at myself and see if there were any illusions that I was suffering from that prevented me from still accepting that person. I didn’t have to agree with every single thing that person said and did to still admire them.

Tim Costello discusses this struggle in his own life in his early days as Pastor of St Kilda Baptist Church. Coming from a middle-class background which taught him such ideals as the one which says cleanliness is next to godliness, he struggled with people who came to his church in St Kilda who didn’t smell right – who maybe hadn’t showered for a while, and who spent all their money on food. He thought that such people could not be real Christians. His illusions contributed to his disillusionment. But then he realised that Jesus and his disciples, especially some of them being Middle Eastern fishermen, would have smelled somewhat too. He also quickly realised that when you live on a low income you don’t think about saving your money because you need all of it to live on. And so it suddenly occurred to him that his background had contributed to his disillusionment. On top of that, when he saw the love of the people who didn’t fit into his theology, he could no longer deny that they were in fact being more Christlike than he was. He had to go through a process of reconversion. As Rikk Watts says, what we see in real life must form our theology, and not vice versa.

Disillusionment can be good for your growth. Depending on how strong you are in your convictions, realising that the people you look up to are only human can actually strengthen your convictions. Recently I had a conversation with an older Christian who I have looked up to for years. Our topic of conversation was something I had been thinking about for a long time, and I realised that I disagreed with him. I also realised that I didn’t have to change my opinion to his just because this was someone I looked up to. I knew what I believed and I could stick with it. And, while our conversation has made me think more about the issue we talked about, I am able to hold to my conviction about it. And on top of that, my respect for this Christian has not diminished. Why should it? He is not God; he is just another human being, albeit a very wise one.

You only become disillusioned if you have illusions to begin with. The fact of our lives is that we all have illusions of some sort. It is part of being human. I have found that getting rid of my illusions is done by a continual surrender of my life to the undeserved love and grace of Christ. As I learn to trust God more, as well as keep in touch with other believers around me, I learn to grow and cherish the relationships I have, and appreciate what I have learned from the many wise people I have been fortunate enough to come across in my life, whether I agree with them or not.

The thing I love about this journey of faith is that the person of Jesus constantly challenges me. There is never a dull moment when you are a serious follower of Christ. It is an adventure of the highest order. As I have learned from reading Larry Crabb, and as I have also found to be true for myself, it is uncomfortable, it is scary, it is thrilling, and it is life. I really do believe this stuff, and in the process I am finding what I have always really wanted.