Are the New Atheists the new outcasts? 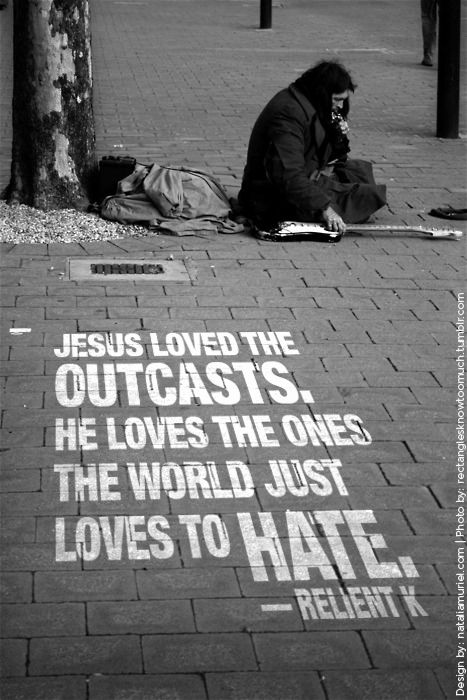 The New Atheists have been around for quite a few years now. They have been pilloried by Christians of many persuasions. Often the criticism has been justified because of the generally misinformed commentary they have made on issues of Christian faith.

For a long time though, many atheists have felt pilloried by society as well. They have felt left out and misunderstood by much of society. Atheists of a more mild persuasion – as many are – have been tarred with the same brush that has been applied to Richard Dawkins and other outspoken atheists like him.

How would Jesus respond to the New Atheists today? I certainly don’t think his first priority would be to organise a debate about whether or not God exists. As has been mentioned elsewhere, Jesus had no need of an apologetic. His apologetic was the “greatest of these”: love. How did Jesus love the pilloried ones? He ate and rank with them. He accepted them just for who they were. It goes without saying then that the approach of Jesus is the approach that we best take.

It is perhaps an indictment on the church in Australia that some atheists have started mimicking the church and organising their own meetings. When NT Wright was in Australia recently, he made the point that the church is possibly the only organised group in society that meets together regularly for the purpose of mutual edification and the promotion of the common good. In our individualised culture, such fellowship is sorely needed. I believe it is hugely enhanced when there is a sense of acknowledging a transcendant power that is greater than ourselves. That is not to take away though from the need for community generally. We are relational creatures, and it is in relationship that we find our true sense of self.

What would a Christlike response to the atheist movement look like? Well, it certainly wouldn’t criticise or mock them for copying the Christian church. It would love by welcoming without any ulterior agenda. It wouldn’t welcome solely for the purpose of trying to convert. It would welcome and show the love of Christ regardless of the response. And if one wanted to commit to the way of Jesus, then great.

The Jesus of the gospels is always our example, inspiration and empowerment when seeking what an appropriate act of love looks like. The atheist movement is possibly one of the equivalents in our society of tax collectors, publicans and sinners. A response of Christlikeness is the way to love them.