Apparently there’s a new album out 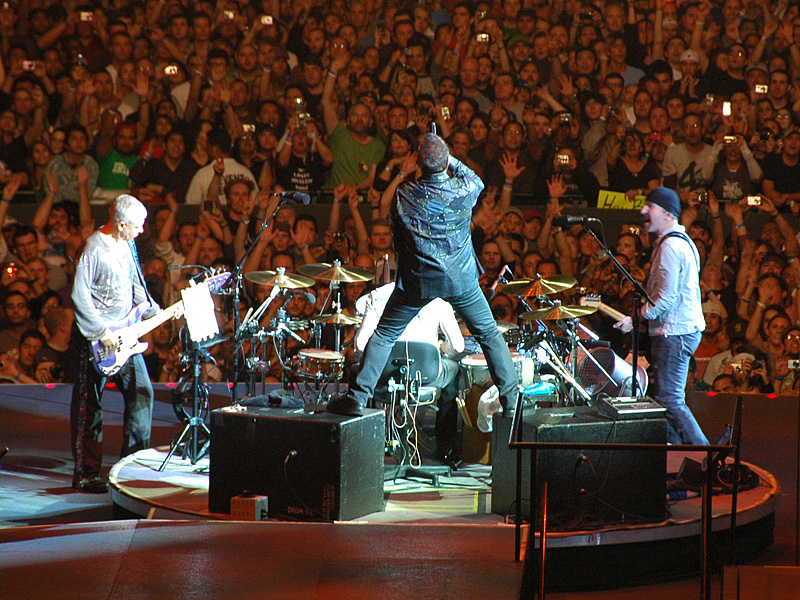 Last Wednesday was a good day for me. In fact it was a Beautiful Day. You might even say it was Magnificent. Do you see where I’m going with this? Yes, The Miracle has occurred. After years of speculation, the latest U2 album is finally here. And, just like that other miracle in Luke 9:10-17, so far, over 200 thousand iTunes users have downloaded and had their fill.

But can you ever get your fill of a U2 album? I have listened to this one a few times already and while I’m preferring some songs over others, those lesser ones are growing on me. You could say a U2 song is like pizza, chocolate or sex: when it’s good it’s really good, and when it’s bad it’s still pretty good!

After a few listens, this album has definitely been worth the wait. The first six songs have the potential to become classics, some of them even anthems. I can just picture them ringing out around massive stadiums around the world (although they would have to be pretty special to beat the sheer spine-tingling electricity of Where the Streets Have No Name being performed live).

On first listen, my initial thought about this album was that it is less Christian than previous ones. But what is Christian? Is it about how many overt biblical references you can count in the lyrics, or is it more about how faith is actually embedded in them? As Greg Clarke says in his eloquent and insightful review of this album, U2 are very good at naturalising their Christianity. It has been a natural part of who they are for so many years that it doesn’t necessarily have to be overt. It just comes out in the stories of life that exude out of these songs. Out of the heart the mouth speaks.

Songs of Innocence is an album that expresses the angst, insecurity and inspiration of youth. It is a tribute to the band’s early years, written with appropriate fondness and richness. The fondness includes tributes to the influences that made the band, and Bono in particular, what they are today. These are songs of influence on four young men, just ordinary guys, who were shaped by the many and complicated facets of faith, religion and politics of Northern Ireland.

When I review albums, I tend to focus on the lyrics to find a connection to relate to. That’s where it’s always been easy reviewing a U2 album. For millions of fans, the uniqueness of this great band lies in the depth of connection one feels, particularly with Bono. You sort of feel like you know him as he opens up about faith, hope, love, sex, fear, and the myriad other ecstasies and agonies of life. No wonder he lamented, back in 1989, the hero-worship that takes place when we turn admiration into obsession, in the brilliant Love Rescue Me, “many strangers have I met on the road to my regret; many lost who seek to find themselves in me. They ask me to reveal the very thoughts they would conceal. Love rescue me.”

Healthy connection though is what U2 have always been about – connection both with their audience and with the life-long search for reality in this roughly three-score-years-and-ten that we’re all supposed to get in our time on this planet.

It is more than the lyrics though that make up U2’s greatness. Their poetic eloquence are complemented by the passionate energy of the music itself, fuelled by a spiritual anger that arises out of the heart of these four Irishmen who have have seen their fair share of troubles in their homeland. The music and lyrics, combined with the yearning, passionate spiritual rage, make this band a consistent standout in a world of increasingly manufactured, bland and, quite frankly, often boring, pop.

For me, the standout songs are Every Breaking Wave (“Every shipwrecked soul knows what it is to live without intimacy” – spot on) and Iris (Hold Me Close), the latter a beautiful, heart-wrenching tribute to Bono’s mother who died so tragically when he was just 14. Written from the maturity and life experience of 40 years hence, it is a touching tribute to a woman who clearly had a major influence on his life, and someone whom he still misses dearly.

It is the ache of loss that comes through quite powerfully on this album. More than once, Bono refers to his own pain and grief that not even being a rock superstar can take away. Here are a few examples:

– California (There is No End to Love)

“We got language so we can’t communicate?Religion so I can love and hate?Music so I can exaggerate my pain, and give it a name”

– The Miracle (of Joey Ramone)

These examples are another attraction of U2, and of this album in particular. The raw honesty is the conduit that makes the connection between band and listener so strong and so intimate.

These songs of innocence are in fact songs of meaning. They are personal to the core; they are honest and they are vulnerable. They are typical, classic U2, in lyric, in sound and in impact on this fan of 30 years’ standing. It was worth the wait.