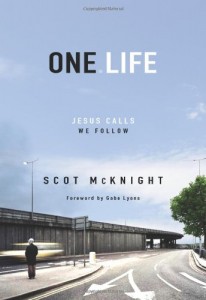 I’ve pretty much decided that the next book I need to read is Scot McKnight’s One.Life – Jesus Calls, We Follow. It says everything the church needs to hear today about what Steve Chalke calls the lost message of Jesus. I’ve been thinking more lately about how much the Christian church is off the mark with much of its teaching. Some of it doesn’t affect us a great deal, but other wrong teachings affect the very core of what it means to be Christian. A pastor of mine said once that an error might not seem that much initially, but eventually it can destroy. If you think of it like taking a trip to the moon, you might be only a kilometre off course at the start, but once you’re supposed to have arrived, you will be hundreds of thousands of kilometres off course.

The following quote from One.Life gives a hint of what our future with God will really be, and it is contrary to much evangelical teaching:

“The Lamb of God is also the Lion of Judah … [and] he triumphed (see Revelation 5:5). How did he triumph? He has been raised from the dead, he has conquered death, and now the Lamb-Who-Is-Lion is on the throne of God. The cross is not the final word; the final word is Life, the God.Life that raised Jesus from the dead to sit on the throne as the Lion. Amazingly, that Lion’s job, this grand finale of books in the Bible tells us, is to install Jesus’ followers as a “kingdom and priests” and our task is to “reign on the earth” in God’s kingdom.

The last word is the roar of the Lamb-Who-Is-Lion-Who-Is-Life. That Lion’s roar doesn’t frighten us. No, that roar gives us confidence to press on with the Cross.Life. That roar empowers us to pick up the cross daily and follow the Lamb-Who-Is-Lion. That roar enables us to fight through our doubts and to struggle through defeats. That roar wakes us up and gets us going and keeps us going straight along the cross path. That roar points the way toward the Kingdom.Life and urges us to give up our One.Life to him. The Cross.Life, the roar tells us time and time again, is about a cross that is empty and about a grave that is empty and about a throne that is full.”

This shows what it will really be like, and it’s wonderful news. It reminds me of a description of Aslan, the great Lion in the Narnia series. When one of the children, upon first being told about Aslan, asks if he is safe, the firm reply comes, “Of course he ain’t safe. But he’s good!”. Says it all.