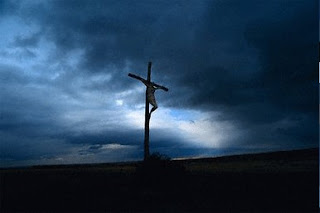 I am fortunate enough to work in an organisation where we have weekly staff devotions. On Maundy Thursday we had an Easter reflection which included this large image of Jesus on the cross with black clouds all around.

It was an image on which I meditated for quite a while. It was a very solemn image and reminded me of this innocent man dying for us, when it should have been us on that cross instead of him.

As I looked at the image of Jesus on the cross, I thought about the impact this could have on Australians. I recently read a book by Darren Cronshaw called ‘Credible Witness’ in which Cronshaw puts forward a way of presenting the gospel that impacts Australians. The recent outrage by many Australians over the incarceration without trial of David Hicks in Guantanamo Bay highlights the fact that the principle of the ‘fair go’ is not yet dead in Australian society. The fact that Hicks may or may not be guilty of plotting with terrorists was not the central issue for many Australians. They just wanted a fair go for Hicks. “Bring him home for a fair trial” was the prevailing opinion. Australians wanted justice, something which everyone deserves.

How much impact this could have if we presented Jesus in the same way to Australians, not as an irrelevant preacher who lived in a distant culture 2000 years ago, but as someone who we can relate to today – an innocent man who also was denied a fair go, who was the victim of a wicked injustice when he deserved to be let free. Imagine how Australians could relate to the overwhelming love of Jesus if we presented him in this way.