The engaging intensity of Captain Phillips

This movie surprised me. I didn’t think it would be as good as it was. When I saw what it was about I thought it might be interesting to go and see, but I wouldn’t have gone out of my way to do so.

Coming out of the movie, the reason I found myself surprised was because of the intensity of how the story was told. Captain Phillips is highly engaging from start to finish. Even though you know how it’s going to end (based on the fact that it’s a true story), you’re never quite sure what is going to happen next.

The story starts out with Captain Rich Phillips (played by Tom Hanks in a masterful performance) flying to Salalah in Oman for his next assignment as captain of the ship, Maersk Alabama. This next trip will be to Mombasa in Kenya, traveling around the Horn of Africa, an area notorious for raids on ships by Somali pirates.

In the meantime we are taken to the desperate lives of would-be Somali pirates, impressionable young men willing to do anything to get in on the mega-cash on offer from their bosses. I have learned from those who have experienced poverty that it makes you do things you wouldn’t do in your right mind. It is said that desperate times produce desperate measures. These young Somalis, easily seduced by the promise of big dollars, will kill to get the money they want to get them out of the miserable existence.

The selection of the team of pirates to do the next job seemed almost farcical. It reminded me of the way you used to pick teams for a game of footy at lunchtime in primary school. People were basically shouting, “pick me, pick me!” as the captain moved amongst them seeing if they were up to the task.

The suspense in this movie really starts when the four pirates chosen for the task make their way out to the Maersk Alabama, traveling as it is like a black sheep away from the rest of the flock, away from other ships in the area, and therefore vulnerable to attack. Phillips soon realises that the four people coming out to him are pirates, and starts using his considerable guile to outwit the potential attackers. Knowing his ship hasn’t got the speed to outpace the pirates, we soon see that Phillips is not naïve about what he needs to do in this situation. Cunning as a serpent, he eventually tricks the pirates into giving up the chase. The battle has been won…for now.

Phillips’ crew soon remind him though that the pirates will be back, and sure enough, they are. And this time they don’t back off. Thus starts the life and death game of how to survive four men with machine guns taking over your cargo ship. This is where Captain Phillips and the crew of the Maersk Alabama realise that this is for keeps.

As the movie takes its twists and turns, with Phillips using more cunning to communicate with his hidden crew to outwit the pirates, the suspense grows as we cannot be sure how this is going to end. Soon though we see the US Navy get involved, and as with many things American, this is where it gets bigger than Texas. 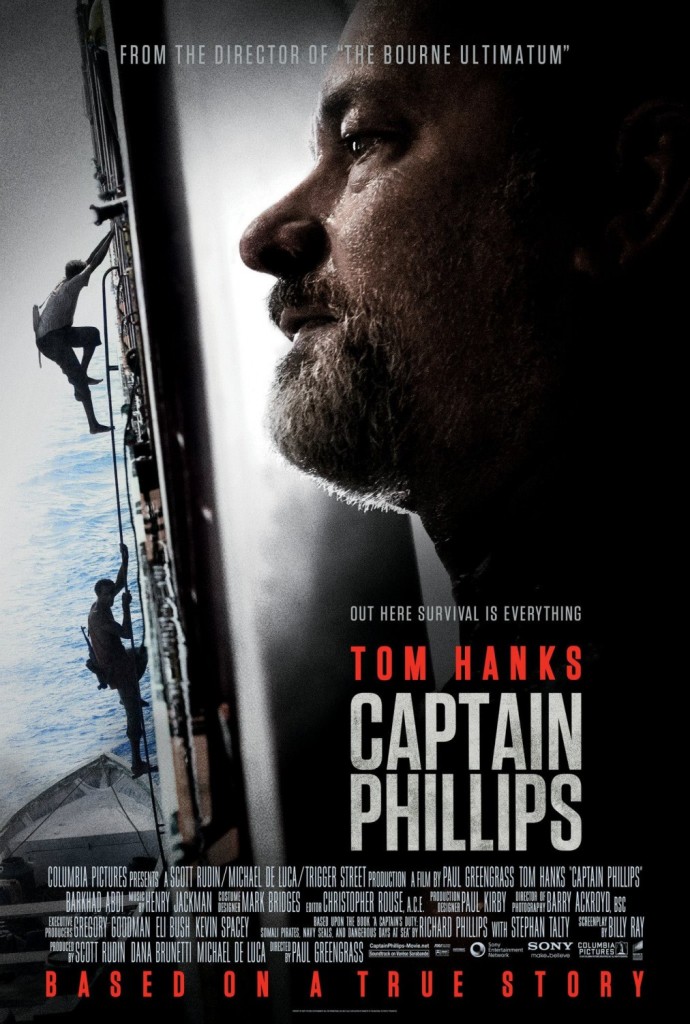 The next half of the movie involves threats, negotiations, loss of emotional control on the part of the pirates, and cool authority from Captain Phillips. What is most striking is the absolute desperation and subsequent delusion of the pirates when it becomes painfully obvious that their cause is lost, but they refuse to go out quietly. When you have two US warships, an aircraft carrier, a fleet of helicopters and a crack team of navy SEALS up against four desperate Somali pirates in what is now a ship’s lifeboat, it is like David and Goliath, but this time you know that Goliath just isn’t going to let this one slip.

What this movie showed me was the desperate lengths that people living in poverty will go to in an attempt to improve their lives. Somalia is one of the poorest countries in Africa. As far as I understand, its poverty is caused by a combination of extreme weather and corruption. I’ve never lived in poverty, so I can’t relate to how desperate you would feel, but in these young and impressionable Somali men, you saw a desperation borne out of the constant frustration of being trapped in a life that you cannot see any way of escaping. And even if they successfully captured a ship, there was no guarantee they would get paid properly by their own corrupt bosses, who were just interested in the same thing – making as much money as possible to get them out of their wretched existence.

Two other emotions struck me after this movie finished. Firstly, I was struck by how far the US will go to rescue one of their own (in terms of another Tom Hanks movie, think Saving Private Ryan). Secondly, I was struck by the seeming irony of how, in going to any lengths to save one of their own, the US will demonise people who they are often largely responsible for keeping in their pitiful conditions.

I’m not sure of the extent of current US involvement in Somalia, but the US is part of a global movement of affluent countries that sets the rules of globalisation that keep countries like Somalia in desperate poverty. Then they demonise them when they want to make a better life for themselves. Saving one man, as they do with Captain Phillips, comes across like the protection at all costs of a way of life.

Please don’t misunderstand. This is not condoning for one minute the actions of the Somali pirates. Understanding the actions of desperate people is completely different from condoning them. Their actions deserve to be treated with justice. Not the “justice” meted out in the end to these particular pirates, but the justice that needs to be done for the preservation of the greater good.

Overall, this is a movie worth seeing. The way different people cope under the most intense pressure imaginable is fascinating in itself. I found this movie a captivating study of what type of people we can become given certain circumstances. How would I have coped if I was one of those young Somalis? And what of the heroism of Captain Phillips? Would I have shown such courage under fire, such leadership and command of a situation that showed a different type of desperation? This movie evokes strong emotions and deep questions, and is a movie I recommend.