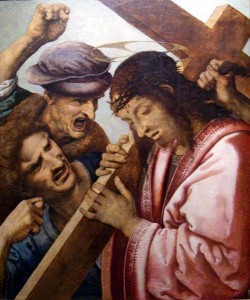 I have mentioned previously that one thing I have noticed over the years of my Christian walk is that the people who really know God, who really know the heart of God, are people who have known what it is to deeply suffer. It is deeply wounded people who know the suffering of the God of the universe.

People who have an intimate experience of suffering are the wounded healers, as Henri Nouwen expressed it. It is these people who I respect deeply and who I listen to when they speak. I want what they have.

For these people, the pat ‘Christian’ answers aren’t enough. They have experienced the deep injustice that life sometimes deals out, and they have experienced it often. These are people who weep easily, not for themselves, but for the state of the world. Theirs is a godly sorrow. They might even come across as somewhat manic at times, and some people might even think that they are mentally unwell. But to the contrary, they are more than likely more in touch with reality than the rest of us.

People who know God intimately and who know deep suffering are like Job and the Psalmists. They sing the blues and they can cry out ‘why?’. But they have also come through the fire with their faith intact, and at the same time their faith is never the same as it was. It has made that longest of journeys from the head to the heart. It is no longer mere intellectual assent to the truths of the Gospel. It is a knowing, a knowing that ‘though I lay my bed in Hades, thou art with me.’

This morning at church I heard a sermon from someone like this. This is a person who knows God and who suffers deeply. For these people, being misunderstood and not feeling heard is a regular fact of life. Life is a lonely path for them. Often taunted, told to lighten up and not be so challenging all the time, these people are a prophetic voice speaking into our malaise. To the indifferent and the apathetic and the asleep, they continue to speak the cry of the prophet. They often feel like a voice in the wilderness. To hear them is often uncomfortable, but at the same time they touch something deep within us. Isn’t that just like what Jesus was like? They often talk about justice, they often challenge the lifestyles of comfortable Christians. For godly people like this, suffering is something they endure regularly.

These people are generally the first to not want to bring attention to themselves. They just go on and do God’s will. But they are sometimes tempted to go the easy way. Like Jesus in the garden, often it feels like too much and they cry out to God asking if they have to really go through all this. But deep down they know something we don’t. They know that this is the way to life, and in the end it will all be worth it. But that is also not their primary motivation. Their primary motivation is to do the will of God. As a pastor of mine said once, loving is sadness, and they are committed to loving, whatever the cost.

The New Testament Christians knew what it was to live like this. In the Book of Acts we are told that they considered themselves privileged to suffer for the Way. They got it. How different that is to the comfortable Christians of the Western church today, who have succumbed to the dominant ideology of the consumer culture.

It seems that if we are really serious about being followers of this Way, then we must be willing to suffer. There is no other way to be a genuine Christian. An honest appraisal of life and love does not leave us any choice. And if that makes us question whether we really are Christian, that is no bad thing. Jesus knew this. Those who thought his teaching too difficult took up their freedom to walk away, and when he asked his closest friends if they too wanted to leave because they thought it was all too hard, Peter spoke those immortal words, “to whom else would we go? You have the words of eternal life”.

With Jesus, the way of life is the way of death. The way up is down, and, as Dietrich Bonhoeffer said, when Christ calls someone to follow, He bids them come and die. There is only one way to know God, and that is to be willing to go the way of the crucified One. In the culture of Jesus’ day, when he said that anyone who wants to follow him must take up their cross, everyone who heard knew full well that this call was nothing less than a willingness to die. May I have that courage today.