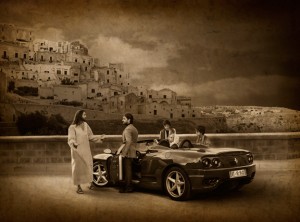 This excerpt from Richard Rohr relates back to my series on What is the Gospel? When we realise that, for the first 300 years of the Christian movement, the Sermon on the Mount was the Christians’ guiding framework, we begin to see the content of the Gospels in the light that they were meant to be read in.

We see in the Gospels that it’s the lame, the poor, the blind, the prostitutes, the drunkards, the tax collectors, the sinners, the outsiders, and the foreigners who tend to follow Jesus. It is those on the inside and the top who crucify him (elders, chief priests, teachers of the Law, and Roman occupiers). Shouldn’t that tell us something really important about perspective? Every viewpoint is a view from a point, and we need to critique our own perspective and privilege if we are to see truth.

Many fail to appreciate liberation theology because of 1,700 years of interpreting the Scriptures from the perspective of the secure clergy class, rather than from the perspective of those on the bottom or the outside. After Christianity became the established religion of the Roman Empire (313 AD), we largely stopped reading the Bible from the side of the poor and the oppressed. We read it from the side of the comfortable and, I am sorry to say, from the priesthood, instead of from people hungry for justice and truth. Now you know why Jesus said, “I did not come for the healthy but for the sick” (Mark 2:17).
– Adapted from the CAC Foundation Set: Gospel Call to Compassionate Action (Bias from the Bottom) and Contemplative Prayer

When the Church became aligned with power, the Sermon on the Mount couldn’t be taken in its context anymore because it was a threat to power. So ever since then we have ‘spiritualised’ it or told ourselves that Jesus didn’t really mean what he was saying, it was just metaphor. Power is so seductive; it won’t let us escape from its deadly clutches without one heck of a fight.