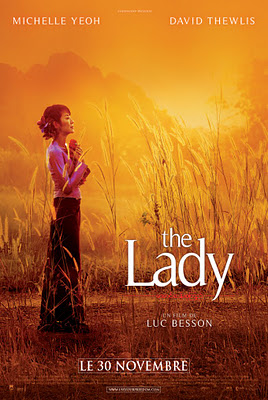 Aung San Suu Kyi has made headlines again recently for her National League for Democracy (NLD) Party in Burma winning seats in Parliament for the first time since they officially won the national elections in 1988 but were unjustly prevented from taking office.

This movie is therefore timely, as well as being timeless, in its beautiful portrayal of this most elegant and courageous of women. Marketed as somewhat of a love story, my initial thoughts were that that would inevitably stain what is the story of a life of true inspiration. My fears were unfounded however, for this was not some mushy romantic interruption of the like that Hollywood would tend to produce. Instead, the unswerving commitment to each other of the one they call ‘Suu’ and her English husband, Michael Aris, is pretty much foundational to this story. It in fact gives Suu Kyi much of the courage to continue her struggle.

Based on facts, the story opens with a young Suu Kyi being doted on by her loving father, a general in the Burmese army in the late 1940s, but one who is committed to democracy for his beloved homeland. Known as the father of the nation, General Aung San’s commitment is so total that it in fact costs him his life, gunned down in a brutal slaying by the enemies of freedom.

As she returns to her native Burma as an adult to care for her dying mother, Suu Kyi is distressed to find herself in the midst of a struggle between the generals and the people that is now seeing protesters shot openly in the streets. Upon realising that she is back in the country, democracy activists plead with her to lead their struggle, convinced she would be an inspiration to thousands as her father’s daughter.

Following discussions with her husband and children, Suu Kyi decides to stay in Burma. The rest, as they say, is history. Her first speech as Opposition Leader cements her as the one the people have been waiting for. As she climbs the steps to the podium, the camera pans out to a million people waving flags and cheering for their new leader. She doesn’t disappoint, giving a stirring speech imploring her people to fight for what is right. As the struggle continues, Suu Kyi puts in place strategies and methods inspired by her earlier reading of Gandhi and his use of non-violence. 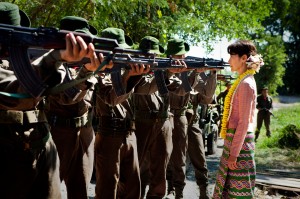 What follows is a portrayal of the brutality and fear of those who will not cede power easily. But the world slowly comes to realise the greater power of the diminutive Suu Kyi, as well as her amazing courage as, in one unforgettable scene, she stares down soldiers with guns pointing in her face and calmly and heroically walks through them, exposing their impotency despite their deadly weapons.

As with all dictatorships, no measures are out of bounds for the generals in their determination to stop Suu Kyi from achieving her ends. They only demand that she be kept alive to stop her from becoming a martyr like her father. And so it was that in 1988 when her party overwhelmingly won the national elections, that the generals refused to cede power and placed Suu Kyi under house arrest.

What this movie portrays is the courage, passion and dedication of one lady to fight for her country’s freedom. But this story is not just about the fight itself; it is more about the way the fight is conducted, and the fact that her manner is the same with her country as it is with her beloved family. And so, when her dear husband is diagnosed with inoperable prostate cancer and has days to live, Suu Kyi is faced with the agonizing decision of leaving Burma to be with him in his dying days, knowing she will never be allowed to return to Burma, or stay and continue the fight while thousands of miles away from her life partner as he passes silently away.

The struggle is highlighted by her many tears as the pain of what she goes through hits home. But, again, as is the case with dictatorships the world over, and as we have seen in the Arab spring in recent times, the power of non-violence is not to be trifled with. Bowing to years of international pressure (during which she won the Nobel Peace Prize in 1991), Suu Kyi is eventually released from house arrest and is allowed to resume her fight from outside the confines of her home again.

In what seems at first to be a surprise, the film abruptly ends during the 2007 protests by Buddhist monks that made world headlines. But we find out during the credits that much of the producing of this movie involved great risk-taking and it is possible that the risks were too great to continue following the documenting of the 2007 protests. Nevertheless, the story ends on a high note, with Suu Kyi greeting her ecstatic supporters at the gate of her home.

Since then, it is of great relief to know that dramatic change is taking place for the good in Burma, with Suu Kyi herself winning a seat in Parliament and her NLD winning 43 of the 45 vacant seats in the lower house. But as she herself said when asked recently about the progress of democracy in Burma on a scale of 1-10, it is approaching one.

Watching this movie from the comfort of the Dendy Cinema in well-to-do Brighton, I could not help but be inspired by the courage of a lady who faced down her oppressors with the power of non-violence and the unstoppable determination of one who truly loves her country, unlike the fear and hatred of those who would only cling to power for power’s sake.

Aung San Suu Kyi is a hero of the 20th and 21st centuries, and The Lady portrays the story in a way that makes one so glad to be standing on the side of justice and freedom. She, more than most, deserves the recognition she is now receiving.

Postscript: The BBC revealed this week that Aung San Suu Kyi has been given a passport for the first time in 24 years and that she plans to go to Norway in June to accept the Nobel Peace Prize which she won in 1991. What a celebration that will be. I’m sure Michael Aris will be there in spirit standing alongside his lady.