Why is it that issues like climate change are not so much ideologically based as based on people’s politics? You can predict that the people who support the idea that climate change is real and that it is largely human-induced will also agree on a myriad of other social issues such as the need for more public transport, and opposing Western troops in Iraq and Afghanistan. On the other hand, those who are climate change sceptics or outright deniers are also those who believe in the free market and supported the war in Iraq and troops in Afghanistan.

Some Christians say it is clear that Jesus was more to the left because of his identification with the poor and marginalised. I think trying to align Jesus with a certain political leaning is very dangerous and is definitely not something that Jesus himself would do. It is bordering on the idolatrous to try to fit him into a box like that. I understand what Christians mean when they say Jesus might be more left-leaning, especially when trying to influence people on how to vote at election times. But as Jim Wallis has said alot in recent years, ‘God is not a Republican. Or a Democrat.‘

Consider what Richard Rohr tells us about the origins of Left and Right as terms to describe political allegiance:

It is interesting that these two different powers took the words Right and Left from the Estates-General in France, where on the right of the throne sat the nobility and the clergy (what were the clergy doing over there?) and on the left sat the peasants and 90 percent of the population. Those are now commonly used terms in the global political world. The Right is normally concerned with maintaining some status quo, stability, continuity, and authority; that is a legitimate need and without it you have chaos. Those on the Right are normally considered innocent until proven guilty.

The powers that be have tended to write history from the side of authority and power, and those who protect it. Once we see this, we wonder why we never saw it before. But some form of the Right is necessary for authority and continuity in a culture, and some form of the Left is necessary for truth and reform in a culture. And thus the pendulum swings, and I guess we all hope we are living at the appropriate time when it is swinging toward our preferred side.

Adapted from A Lever and a Place to Stand, p. 97

Rohr reiterates and expands on some of these points again:

In most of history you will invariably have these two movements, because we didn’t have the phenomenon of the middle class until very recently. The vast majority of people in all of human history have been poor, as it was in Jesus’ time. Yet the people who wrote books and controlled the institutions have almost always been on the Right. Much of history has been read and interpreted from the side of the “winners,” or the Right, except for the unique revelation called the Bible, which is an alternative history from the side of the enslaved, the dominated, the oppressed, and the poor, leading up to the totally scapegoated Jesus himself. He tries to put inside and outside together, but is killed by those entrapped and privileged on the inside. 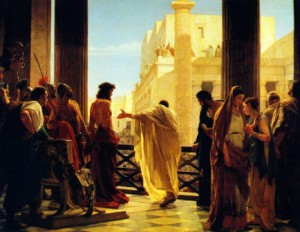 John Smith has also said that history is often the lies agreed upon by the victors. I remember in primary school being taught that Captain Cook discovered Australia. It never occurred to me that the traditional owners of this land had been here for a mere 40,000 years before that. Joel Edwards of Micah Challenge has added that if you have a theology of power, seeing yourself as ‘victors’ and ‘overcomers,’ it can alienate us from people’s suffering, which of course is where Jesus spent most of his time. I have said elsewhere that we need to rid ourselves of the idea that Western theology is what the rest of the world needs to hear. What we in fact need to hear is the voice of the Bible which is most often the voice of the poor, as Richard Rohr says above.

When the church aligns itself to power, it loses its authority and prophetic voice. That’s why I love looking at the first 300 years of the church, because that was when the Sermon on the Mount was the guiding framework for the church. We need to remember that, while Jesus was absolutely political, he was definitely not partisan. Let’s be sure that at heart we are followers of Jesus rather than politically partisan people who try to make Jesus into our favoured political party’s image.