Invading grace – saving us from ourselves 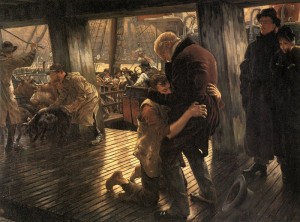 Here is a beautiful piece on grace and its saving impact on our lives:

Forever The world, invaded by death, was in a new state of chaos. Instead of people’s lives being organized by love for God, they were driven by the constant pursuit of here-and-now pleasure. Death had invaded. The world had gone mad. But the story was not over, because God would not sit and watch the demise of his plan.

So God, in his grace, invaded our here-and-now madness in the person of his Son. Jesus did not transgress God’s boundaries. He did not live for his own pleasure. He refused to ignore eternity. He lived a life that was perfect in his Father’s eyes.

But he did more; he willingly took the penalty of our selfishness on himself. On the cross he took our punishment and purchased our forgiveness… Because of [his] forgiveness and righteousness, we are accepted into God’s family forever. The crisis of the human existence is not that we are horizontally unfulfilled, but that we are vertically cut off.

Grace connects us once again to God, and in so doing to the one place where our hearts can find rest and where we can be given back our senses. Grace not only connects us to God, but delivers us from ourselves and from the madness of our propensity to make life about little more than us in the here and now.

And what kind of forever? A forever that is not only free of punishment, but free of the madness of self-centered, pleasure-oriented here-and-now-ism, and the double death that goes with it.

–Forever: Why You Can’t Live Without It, by Paul David Tripp

This is the essence of life.  In a world where we are told by the media and our political leaders that life is all about you, grace gives something better – salvation from ourselves. Martin Luther King said once that the end of life is not to be happy but to do the will of God. And N.T. Wright has said that because we have been shown grace, we can show grace to others.