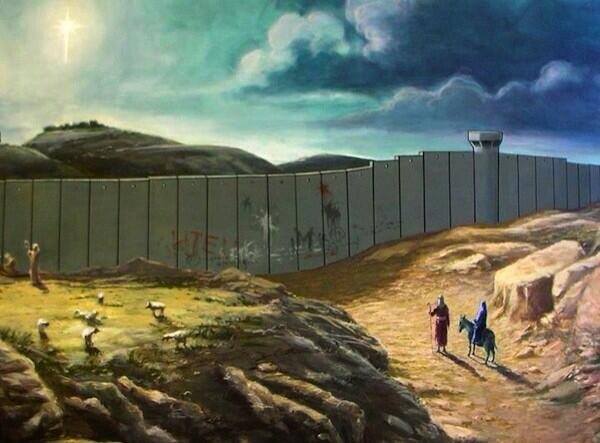 Driving home tonight listening to the ABC’s Newsradio, I heard about more fighting in South Sudan. In a country that is only two years old, tens of thousands of people are fleeing for their lives to get away from the conflict.

As I listened, first I felt somewhat numb. More bad news is nothing new, but at Christmas time it just hit me a bit more than it would normally. As I listened to the radio report, I recalled an image that is being spread around on Facebook of Joseph and Mary, pregnant with the Christ child, traveling to Bethlehem, but being blocked by the dividing wall that separates Israelis from Palestinians in that strife-torn land.

We live in such a world of conflict, hatred and self-centredness. Although official statistics say that the amount of conflicts in the world has dropped in recent years, there are still millions of people displaced, starving and being forced to do things against their will. And most of it is because of man’s inhumanity to man.

As I kept driving, listening to the story of fear and hatred coming out of South Sudan, I thought how it makes my suffering this year pale somewhat. But then I thought that my suffering, and anyone else’s suffering, is no less because of millions more suffering in other places. We suffer in different ways. I am thankful though that I have the comforts of living in an affluent country. I have a bed to sleep in tonight, I have enough food. My daily life is not a battle for survival.

Nevertheless, as I pondered the suffering in the world, I also thought of how we talk of having a merry Christmas every year. I could relate to U2’s song, Peace on Earth, a song of frustration, lamenting how every Christmas we sing of peace on earth and goodwill to all, but all we hear about is more strife and conflict. But thankfully the story doesn’t stop there. If it did, we would just stay in frustration. But suffering is not meaningless.

Some years ago I read a beautiful devotion that said that Christmas doesn’t have to be merry to be meaningful. That has always stuck with me and it is something I say to people for whom this time of year will not be happy and for whom it would therefore be trite to say “Merry Christmas!”

As well as being meaningful though, I thought about the fact that Christmas is the very thing we need right now. For me, it is the hope that is Christmas that is what sustains me. What we celebrate this year, whether we realise it or not, is the most hopeful event that has ever happened. God coming into the world is exactly what we need. For those fleeing conflict in South Sudan, for those traveling the seas seeking asylum in a foreign land, for Palestinians and Israelis separated by a wall of concrete in their cities and a wall of hatred in their hearts, the baby in the manger is the hope of the world.

NT Wright talks about the seemingly ridiculous notion that God is in control of the world when all around we see war and injustice. But he is right. The Christ child, born in Bethlehem that starry night 2,000 years ago, brings hope where there is none, brings light where there is darkness, and brings love where there is hatred. Because of Christmas the light of love, hope and peace is beginning to reign in the hearts of people. Outbreaks of love are spreading like a virus in a computer. It is an unstoppable force, and the gates of hell, evil and darkness will not overcome it.

As Desmond Tutu said once during a church service in the apartheid years, evil has already lost. Good has already won. Christmas is here. One day the wall that separates Palestinians from Israelis will come down, and peace will reign in lands of current conflict and in hearts which currently harbour hatred. There are many battles seemingly being lost today in places like South Sudan. But the good news is spreading. Love is on the move, and it is all because of a baby who just happened to be the God of the Universe coming to reconcile, restore and renew.

Have a meaningful, hopeful, if not merry Christmas everyone!