Dancing on the grave of division 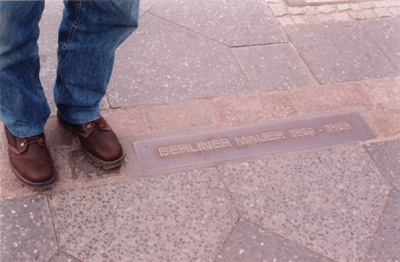 This is a slightly reworked piece I wrote in 2009 for the 20th anniversary of the fall of the Berlin Wall. This year marks the 25th anniversary of that most momentous of occasions in world history. If it has some meaning for you, I hope you take a lot out of it.

1989 was a big year for me, and for the wider world. It was the year I left my teenage years behind. It was also the year that the brutality of government repression in Tiananmen Square rocked the world, U2 came to town and rocked the tennis centre for seven nights straight, and Hawthorn went back-to-back.

The biggest news by far that year though happened in November when the Berlin Wall came tumbling down, literally overnight. For 28 years the wall had separated Berliners from each other, dividing not just a nation but whole systems of government, as well as of course families, traumatising them in the process.

This is all very personal for me, having German parents who grew up during a world war which saw their country devastated both from within and without.

This month marks the 25th anniversary of that most wonderful night when people who had been divided for decades were suddenly reunited, and thousands danced on the symbolic grave of separation, celebrating the death of division. For millions of Germans it was no doubt one of the enduring memories of their lives. For them, November 9, 1989 will never be forgotten.

I can still recall watching it on TV at my mother’s home. As I was watching, I looked over at Mum and saw tears streaming down her face, unable to believe the enormity of what was happening before her eyes. Talking to my Dad later, he said he thought it would never happen in his lifetime.

Common consensus though says that the real hero of the fall of the Berlin Wall was Mikhail Gorbachev who wanted to restructure the Soviet Union and make it more open. What ‘open’ meant was indeed open to interpretation, but history now tells us exactly what Gorbachev meant by it.

The words he used for these changes were ‘perestroika’ and ‘glasnost’.

In 2003 I visited Berlin on a tour through Europe. Walking around the city with a cousin who lived there, the remains of the infamous concrete structure were still there for all to see in some places. They were there as a reminder of what once was, and what must never be again. Throughout Berlin you can see bricks in the ground where the Wall used to run, literally cutting across streets and cutting families off from each other.

My cousin described to me how she used to feel when she would occasionally make the trip from East Berlin to the West in those dark days, and the relief she would feel as she crossed the checkpoint back into West Berlin. On this day she said she could still feel hose same emotions as she literally stepped over the same line where the Wall used to be. The impact of both trauma, and then healing, on the human psyche runs deep.

As I reflected on what these people had gone through, I felt a mixture of emotions. I thought about my heritage in this old city, this city of division and now of amazing reunification.

On November 9, Berlin will celebrate the 25th anniversary of the fall of the wall with different events and commemorations. I wish I could be there to celebrate with them. For many, there will no doubt be painful memories of those brave souls who were cut down by border guards over the years in a desperate attempt to escape the East. I hope this celebration will also be a tribute to them.

November 9, 1989 is, for me, one of those days when I remember where I was and what I was doing when I heard the news of the wall coming down. It was a day which is a reminder of what the kingdom of God will be like, a place where the only tears will be tears of joy, and the pain will be long forgotten as we worship the Prince of Peace together in the new creation.