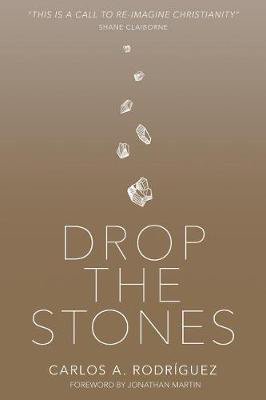 Sometimes you read a book and you get a sense that you want to be the sort of person the author is writing about. Drop The Stones is just such a book.

The author, Carlos Rodriguez, is a pastor, teacher and blogger who loves to write about his love of Jesus and of the grace he brings to broken people. This, his second book, is about the grace and forgiveness we see Jesus display in the story of the woman caught in adultery in John 8:2-11. Interestingly, this is a story that almost didn’t make it into the gospel narratives, and some think it may have been added later. Whether it actually happened or not, it is entirely reflective of the love and grace of Jesus and gives us a wonderful look at just who Jesus is. And it is this that Rodriguez wants his readers to discover.

The book is divided into three sections. It looks at the story through the lens of the woman caught in adultery, the Pharisees who wanted her stoned, and Jesus who refused to condemn her. The emphasis of the book is on the fact that each of us can see ourselves in all three characters at different times in our lives. I know I certainly can and have, and the author is the same. That is actually one of the attractions of this book; Rodriguez is disarmingly honest and humble about his own weaknesses and where he has failed to be Christlike in his attitudes and actions at various times in his life. At the same time, he is glowing about others, especially his wife and others in his church community.

The other attraction of this book is that each chapter is only a few pages long and is generally told as a story of someone who has shown the love that Jesus showed to the woman. The shortness of the chapters makes the book easy to read and get into.

What stands out most though is not just what the book is about, but the way it is written. This is a book about grace written with grace. As I read each chapter, I would regularly come away feeling like I was more in touch with the grace and love of this Jesus who showed exactly that to the woman caught in adultery. The great attraction of this book is that it is not just information that can increased my knowledge of the story; it actually brought me closer to Jesus. And that is because of the heart that Rodriguez writes with.

Taking you in to the mind and feelings of the different characters in the story, the author makes you feel as if you are there in the midst. Extra details are also added, details which add to what would have most likely been going on in the minds and attitudes of the people involved. And these details pull no punches; they are honest about the deceptiveness of the woman herself; she is not painted as a totally innocent victim, but at the same time you don’t ever feel judgmental of her for what she did because what was in her heart was what is at times in the hearts of all of us. This is where I was reminded that I need just as much grace as the woman did, and I get it from Jesus just as much as the woman did. That is the bottom line that comes across in this book. We all need grace and we all get it. At different times, we are all just as judgmental as the Pharisees, we are all just as deceptive as the woman was, and we are all just as much a victim as she was. And on top of that, we are also all just as much full of the love and grace of Jesus at times.

What this book highlighted for me was that being a Christian is ultimately about being Christlike and wanting to be filled with the love of God for broken people. We can have our disagreements about doctrine and theology (although those things are important too), but what matters above all is that we love with the love that Jesus showed to the woman caught in adultery.

Jesus broke the rules when he responded to this woman. He of all people was the one who had the right to obey the Old Testament law and throw the first stone. But he led the way by showing who God really is. He took a huge risk in offering for others to throw stones (as someone else has said, what if one of them had thrown their stone?), but the Pharisees thankfully knew in their hearts that they weren’t without sin, and Jesus forgave her. That is the bottom line this story and it is the bottom line of this book. I just pray that next time I am tempted to be judgmental of someone who has done wrong, I will instead drop my stone and be just like Jesus.