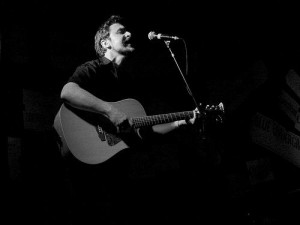 Eden Parris is a friend of mine who I have known for a few years now. He has always impressed me as a man who is genuine in his friendship and desire to be a good person. I spent some time with him on a men’s camp last year and we ended up having quite a deep conversation about our lives and about our view of Christian faith. It turned out that we share similar views. So when, as he left the camp, he gave me a copy of his album Rumours of Hope, I looked forward to listening to it, not really knowing what to expect in terms of the type of music and what he would be singing about.

After listening to a few songs I was hooked. This is a special album, and Eden is a special songwriter. Of all the Christian music going around today, you don’t hear alot about the biblical message of the kingdom of God and about the good news of who Jesus really is and the new creation that he has inaugurated. Much Christian music is about feeling good, and unlike most of the old hymns, does not contain much good theology, and therefore doesn’t bring us close to the God we worship. As far as great theology goes, Eden’s songs are alot closer to the old hymns than much of today’s Christian music.

To paraphrase Walter Brueggemann, this is an album of prophetic imagination. Throughout the songs, Parris inspires us to dream of a better world, a world that is not just a pipe dream, but a world that, if we dare to believe it, has already been inaugurated in the life, death and resurrection of Jesus of Nazareth. Some of the lyrics from the first song, A Deeper Magic, say it all:

This is just a sample of the quality of lyric (more of which can be seen in the video of the whole song above) and inspiration that we see on this album. But it is not just dreaming that we are called to in these songs. They also draw us out of our fears and natural cynicisms to be a part of something bigger, something worthwhile, rather than be caught up in the treadmill of a life that is on its way out.

Clearly influenced by Jesus’ message of the kingdom that is both now and not yet, as well as by such geniuses as C.S. Lewis, this is an album that is easy to relate to. It not only draws you out of yourself, but Parris also gets quite personal and sings of issues that resonate with the astute listener, be they about the relationship struggles that we all go through if we want to make them work, or about the encouragement that we all need on the often trudging road to our destiny of love.

It is not just the lyrics that make this album so enjoyable though. It is the musical style that evokes a certain simple joy in the midst of struggle and pain. The lyrics and the music complement each other to bring out the sure and certain hope of the kingdom despite what  too many people experience in our world of injustice and inhumanity.

This is an album that leaves you wanting more. It inspires a desire to live the dream, but not the dream that our society talks of. This album speaks of a dream that is just so much better and complete that it doesn’t bear comparing to anything that we think is special in this world’s way of thinking.

This album has lyrics and music that more people need to be made aware of. I recently watched Eden play live with one of his band members, during which he played a song that will be on a forthcoming album. I’ll be keeping an eye on Eden’s Facebook page for the details. If it is anything like Rumours of Hope, it will be well worth the wait.

If you would like to book Eden Parris and his band The Second Chance, email edenparris@yahoo.com.au